The story of a collaboration always originates from an encounter. And encounters, as we all know, often occur randomly and most of the times have no particular appeal,unless people should feel that a particular, special bud is present “in the air” and that it shouldn’t go lost since, if fed, could bear good fruit. The encounter betweenAntonello and Alessandro took place at the Piccinni Conservatory in Bari, per excellence a proper place to stimulate musical collaborations. This favorable condition is of course not sufficient to make these collaborations happen and survive outside the Conservatory. In fact, something more profound is required: a common view upon music and life in general, naturally leading into the creation of a faithful music production. And so it happened with these two artists who, from a certain point on, started working as a duo with full commitment upon original compositions of both, trying to pursue a homogeneous sound and working on their music in a verycritical way, including a deep care on even the most “insignificant” details. Takingadvantage of the availability of Mast studio and its great sound engineer Massimo Stano, the two musicians fixed their first recording session in that studio in order to get a better understanding on how to make this music material sound good. Every musician knows how important it is to listen back to what he plays in order to get a better comprehension and transform the music the best way possible. Therefore, after some months the two artists have planned a second appointment in the same recording studio, capitalizing on the previously recorded material and substitutingwith some new material all the stuff that didn’t seem to sound good enough duringthe first session. Besides new songs and a couple of freely improvised episodes, this second session features the electric bass played by Antonello, which adds a touch of freshness on top of the already definite sound given by the union of double bass andpiano, trademark of the whole recording. Great Tommy Cavalieri’s mastery has donethe rest: thanks to him the CD sound has reached out its maximum shape and the entire work is able to tell a story. A story of life, friendship and constant research for Beauty in all its possible facets.

All arrangements by Alessandro Di Liberto 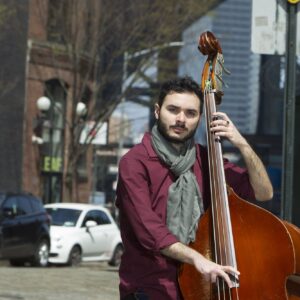